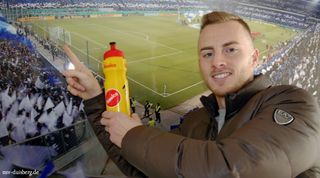 In case you missed it, Flekken produced one of the greatest ever goalkeeping howlers by taking a sip from his water bottle at the wrong time in Duisburg's 2-1 victory over Ingolstadt in the 2. Bundesliga on Saturday.

Flekken and his water bottle have achieved world fame after the mistake went viral. So, to benefit from the newfound attention, Flekken is auctioning his water bottle with the proceeds going to zebrakids, who work with disadvantaged children in the city and surrounding region.

The Dutch goalkeeper said: "The bottle and I wrote a bit league history at the weekend. We did our best to deal with the story after the match, and now we're making the story even better. We're auctioning my bottle to zebrakids.

"The work zebrakids do with so much passion is very, very important. It is therefore important to me to support this commitment."

Fancy being in with a shot? Just email your bid over to info@msv-duisburg.de.

The winner of the auction will be announced on Monday, March 5.

Billericay owner Glenn Tamplin reinstates himself as manager... days after demoting himself