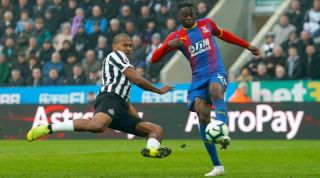 The race is on to land the signature of Crystal Palace’s highly-rated young full-back Aaron Wan-Bissaka.

Rivals Manchester City and Manchester United are among the suitors for 21-year-old after an impressive season at Selhurst Park, according to the Mail.

Bosses at City were particularly impressed by Wan-Bissaka’s performance when Palace delivered a shock defeat to the title challengers at the Etihad Stadium in December.

But they will face competition from Manchester United, with Ole Gunnar Solskjaer set to lose veteran right-back Antonio Valencia at the end of the season.

It is expected that Wan-Bissaka would cost around £40 million, and Palace manager Roy Hodgson has publicly admitted that both he and Wilfried Zaha could leave at the end of the season.

10 great statistics that perfectly sum up this Premier League season