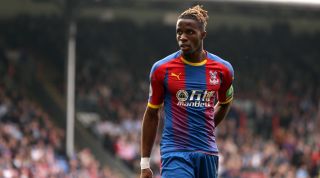 The Eagles pair have been regularly linked with other clubs after impressing at Selhurst Park this season.

Borussia Dortmund are believed to be interested in Zaha, while Manchester United are also said to be weighing up a bid to bring the forward back to Old Trafford.

Wan-Bissaka has exploded onto the scene this season and the 21-year-old is on the radar of several big Premier League clubs including Manchester City.

Hodgson insists he hasn’t given up hope of keeping the players at Palace, but remained realistic about their potential sale.

“It has been happening on a regular basis this season that Wilf and Aaron have been linked with other clubs,” he said.

“We have moved to England now, we were in Germany for a while. We are back in England now - being linked with moves to bigger clubs in the Premier League.

“The club is certainly in no way advertising them or promoting them as saleable objects. We would be more than happy to keep them.

“But we just have to remain realistic and see what happens. If offers come in they will obviously be assessed, like everything else.

“As I heard Manuel Pellegrini quite rightly say the other day [when discussing Declan Rice]: every football player does have a price.

“The fact they have long contracts; that doesn’t mean to say their feet are nailed down to Selhurst Park or Beckenham here.

“But we have no interest in selling either player. Our aim, our intention, our hope is that we will start next season with both of those in our team.

“And if not, we will have to hope that the offers for them are sufficiently good that the club feels they will be worth taking.”

Remembered The Greatest Goal I Ever Saw… Paul Scholes vs Barcelona, 2008