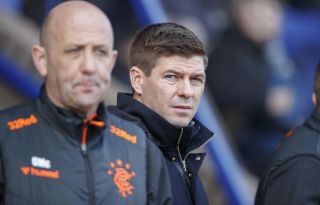 The Hoops bounced back from an early blow to beat Kilmarnock 3-1 and take another major step towards a ninth consecutive title following Rangers’ 2-2 draw against St Johnstone.

Steven Gerrard is looking for solutions to his defensive woes

The Rangers manager admitted he would need to come up with something after his side conceded two “silly, silly goals” in a 2-2 draw with St Johnstone. Niko Katic looked particularly vulnerable as the back four struggled to cope with balls up to goalscorers Callum Hendry and Stevie May. Gerrard’s men have now conceded six goals in their last three away league matches.

Mix-ups can have positives consequences

St Johnstone boss Tommy Wright decided to take May off five minutes before his late equaliser – but the message did not get through to his kit man, who held up the number for right-back Anthony Ralston, who Wright had originally intended to take off. Saints had to hold on without a recognised right-back as Rangers threw men forward following the 80th-minute leveller but the blunder ultimately proved beneficial to the Perth team.

The Hoops were in tremendous form in their 3-1 win against Killie after going a goal down after seven minutes to an Eamonn Brophy penalty.

It was Celtic’s 10th domestic win out of 10 fixtures in 2020, with 10 league games remaining but Lennon played down talk of making it nine successive titles in a row.

“The title is a million miles away as far as we are concerned, we just want to concentrate on our affairs. Since the turn of the year we have been magnificent.”

So claimed Derek McInnes after his side went down to a 2-1 defeat by Ross County following Dean Campbell’s first-half red card. The Dons had won 4-3 in an extra-time thriller at Kilmarnock on Wednesday and McInnes admitted they did not have enough in the tank to cope with the numerical disadvantage.

Motherwell could emerge from their slump in a commanding position

Stephen Robinson’s side made it seven games without a win but they coped better than Aberdeen with 10 men as they held out comfortably for a goalless draw at Hamilton following Christopher Long’s first-half dismissal. They could have snatched a late winner too but came off to find they had jumped back above Aberdeen into third with a game in hand at home to St Mirren on Tuesday.