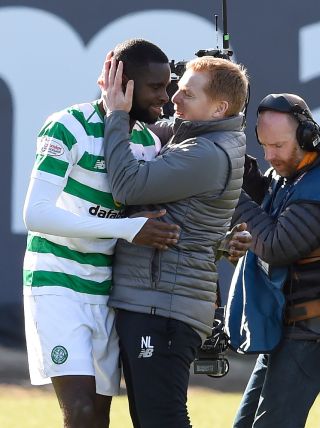 Celtic moved a major step closer to retaining the Ladbrokes Premiership title on Sunday and Hamilton extended their lead in the race to avoid the drop.

1. Celtic have one hand on the trophy

The celebrations after Odsonne Edouard netted a winner at Dundee deep into six minutes of stoppage-time told a story. Neil Lennon admitted his major emotion was relief after the Frenchman’s last-gasp winner ensured Celtic avoided a second consecutive goalless draw. For the second week running, Rangers had handed the Hoops the chance to extend their lead and Lennon, given the difficult task of improving on Brendan Rodgers’ legacy, saw his side move 10 points clear.

2. Brian Rice can get the better of Craig Levein

The Hamilton head coach and former Hibernian midfielder admitted before the visit of Hearts that he had never been on the winning side against the Tynecastle boss during their playing days on opposite sides of Edinburgh. But Rice got the upper hand on Saturday after bringing Aaron McGowan back into his team following a 3-0 defeat by Motherwell when Ziggy Gordon started at right-back in a flat back four. McGowan started at wing-back and netted the only goal with a stunning volley.

Rangers’ opponents in their past four games – Aberdeen twice, Kilmarnock and Hibernian – have racked up 22 yellow cards but the Ibrox boss is not satisfied with that punishment. After a 1-1 draw with Kilmarnock, Gerrard claimed there were a lot of “dangerous” fouls from the Ayrshire side. But Killie boss Steve Clarke felt Gers defender Connor Goldson was the player who was closest to getting a red card.

🏆 Ladbrokes Premiership table after a 1-0 win for @CelticFC against @DundeeFCpic.twitter.com/aisfpiGvaW— SPFL (@spfl) March 17, 2019

Hibernian were in eighth place when the former Barnsley and Leeds boss took over but they took a massive step towards securing a top-six place with a 2-0 win over nearest rivals Motherwell. They now boast a five-point lead with three games left after Heckingbottom took his tally to 13 points from five games.

After winning eight and drawing one of their last nine away games, manager Derek McInnes told his players to bring the calmness of their form on the road back to Pittodrie. McInnes felt his side had chased games too desperately after losing goals in recent weeks. But they failed to build on Niall McGinn’s opener against Livingston as a 1-1 draw made it one win from their last nine home encounters.