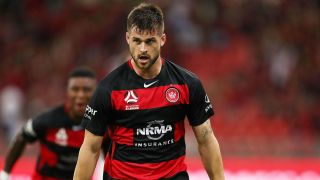 Josep Gombau's side had been left in a precarious position just inside the top six following two draws and a derby loss to Sydney FC over their last trio of outings.

But Saturday's resounding home triumph, inspired largely by Brendan Hamill's second-half double, got things back on track for the Wanderers against a Phoenix side under the interim charge of Chris Greenacre following Darije Kalezic's departure this week.

It took 40 minutes until Brendon Santalab tapped in the opener from Mark Bridge's assist, but Sarpreet Singh levelled matters within a couple of minutes.

The hosts ran away with it inside the final quarter of the match, Hamill heading home in the 68th minute and punishing poor defending to double his tally soon after.

FULL TIME | come out strong in the second half and collect a well deserved three points March 10, 2018

Chris Ikonomidis rounded off the scoring late on to seal a timely win and lift Gombau's men up to fifth, although Perth Glory's 3-1 victory over Central Coast Mariners left the gap to seventh spot at four points.

It is Glory who occupy that position, Joel Chianese scoring in each half and Xavi Torres netting a stunner to ensure Andrew Hoole's effort was merely a consolation.