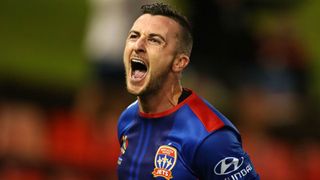 Roy O'Donovan scored twice and had a hand in the third as Newcastle Jets cruised to a 3-0 win over Wellington Phoenix to maintain their unbeaten start to the A-League season.

The division's top scorer took his tally to seven from five matches with a first-half brace before Andrew Nabbout rounded off a straightforward success for the hosts at McDonald Jones Stadium.

O'Donovan opened the scoring in the 37th minute, seizing on Goran Paracki's atrocious backpass and finishing at the second attempt following Keegan Smith's initial save.

The Irish forward doubled the lead in first-half stoppage time from Dimitri Petratos' cross and the game was safe early in the second period as O'Donovan's backheel freed Joseph Champness, whose pass allowed Nabbout to curl home a smart finish.

The Jets sit third in the table, two points behind leaders Sydney FC, while the Phoenix have just two points from their five outings.

Keogh rose to nod in at the back post following a superb run and cross from substitute Mitchell Mallia, meaning the hosts were not made to rue Diego Castro seeing his fourth-minute penalty saved by Paul Izzo.