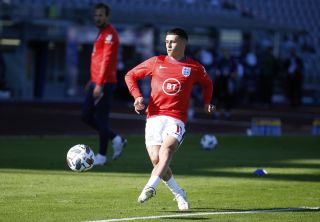 Phil Foden made his England debut as Gareth Southgate’s men struggled to a 1-0 victory in Iceland.

Here, the PA news agency looks at the 20-year-old’s contribution in the Nations League opener.

"To make my debut is a big moment for me and my family."@PhilFoden spoke to @SkySports after winning his first #ThreeLions cap:pic.twitter.com/zDCBZQS0rQ— England (@England) September 5, 2020

Southgate used a 4-3-3 formation in Reykjavik, with Foden the most attack-minded of a midfield three that included James Ward-Prowse, making his first start, and Declan Rice. Foden dropped back to collect possession and was positive with it on an afternoon when Iceland allowed the visitors to keep the ball. Hanging back on the edge of the box when the ball came down the wings, he moved between the lines in a bid to open things up.

Foden played some nice passes in front of empty stands, including a lovely ball through the lines that Raheem Sterling failed to control. That is the kind of pass the Three Lions faithful will be hoping he can provide more of moving forward, while another poor touch by a team-mate preventing a switch of play coming off shortly before he was taken off in the 68th minute.

While clearly unfazed to be wearing the Three Lions shirt, Foden did not have his best day – but nobody did in this rusty Nations League performance. The best is surely to come, though, as the Manchester City playmaker undoubtedly has the skillset to prise open such rigid sides and will only improve as the experience builds.