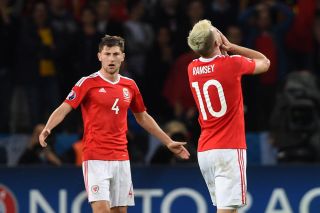 Aaron Ramsey and Ben Davies have been left out of Wales’ squad for the Euro 2020 qualifiers against Croatia and Hungary.

Forward Gareth Bale, who has not featured for Real Madrid for the last month amid rumours of a fall-out with club manager Zinedine Zidane, is included in the 28-man selection.

Swansea winger Daniel James, who has been heavily linked with a move to Manchester United, returns after missing the Portugal training camp earlier this month through compassionate leave following the death of his father.

Wales, who sit second in Group E with maximum points following their opening game, face Croatia on June 8 in Osijek, before travelling to Budapest to play Hungary three days later.

Chelsea midfielder Ethan Ampadu missed the qualifying win against Slovakia in March but has overcome a back problem and is included by manager Ryan Giggs.