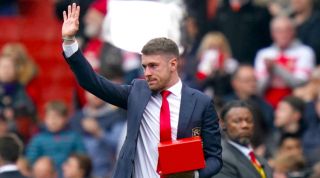 Ramsey left Arsenal for Juventus on a free transfer in the summer after 11 years at the North London outfit.

His exit left a lot of fans angry with the club for not sorting out the Welshman's contract situation sooner.

However, Ramsey has always maintained there was an offer on the table, but then Arsenal took it off again.

The 28-year-old played 262 games for the Gunners, scoring 40 goals. He endured an injury that threatened to end his playing career before it had really begun.

In an intervew with the BBC, Ramsey spoke about the negotiations that led to him leaving for Italy.

"There was a lot of confusion and a lot of things were up in the air," he said. "The decision was made and that was the situation, so I had to look at other options."

Despite Ramsey's bittersweet end to his Arsenal career, he was full of optimism for his former club.

"Arsenal are going through a transitional period at the moment.

"They have many great players and a lot of talent coming through. They are definitely going in the right direction - but my situation now is at Juventus.

Ramsey doesn't want to dwell on the past, but rather relish what the future has in store at Juve.

"I have an unbelievable opportunity at a massive club. I just want to be part of this now.

"Hopefully I can help my team-mates and my club achieve some great things on the big stage."