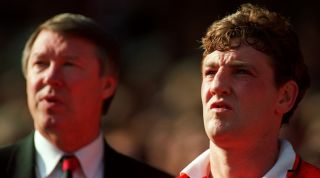 The dream job can take on nightmarish proportions. Steve Bruce is the lifelong Newcastle fan who served 12 other clubs in four decades as player or manager before gravitating back to his home town. He spoke of “complete surrender” after his players lost 5-0 at Leicester on Sunday.

Ole Gunnar Solskjaer is indelibly associated with Manchester United’s greatest moment, but his image of the club appears frozen in time since 1999. Yet he has transported them back not 20 years, but 30, overseeing their worst start to a season since 1989. They meet on Sunday, studies in management’s capacity to age men, perhaps overseen by a mutual mentor.

It is not quite a reunion. Bruce left United in the summer of 1996, shortly before Solskjaer joined. That close-season break apart, one or the other was a United employee between 1987 and 2010. Between them, they witnessed virtually all of Sir Alex Ferguson’ record-breaking reign.

They have the memories and the medals to show, but little of the magic rubbed off. Briefly, brilliantly, Solskjaer appeared Ferguson’s heir in his stunning run of 14 victories in 17 games as United’s catalytic caretaker. Five wins in the subsequent 22 matches – six, if you want to count a penalty shootout triumph over Rochdale – provided a different impression. Ferguson’s heirs at Old Trafford have struggled. So, to varying degrees, have the various apprentices to the managerial master.

If Ferguson’s legacy on the pitch has been tainted by his successors, his legacy in the dugout is underwhelming. A host of his ex-players have got managerial jobs. Some have even won league titles – Laurent Blanc in France, Henning Berg in Poland, Gordan Strachan and Alex McLeish in Scotland, Solskjaer in his native Norway – but examine their experiences in England (or, in Solskjaer’s case, Wales) and the verdict looks unflattering.

This probably is not an argument that will meet with any approval on Tyneside, given that the beleaguered Bruce’s Newcastle risk the third relegation of Mike Ashley’s wretched reign, seem to lack a coherent strategy and are the division’s lowest scorers, but there is a case for saying he ranks as the most successful of Ferguson’s old charges in English club football.

Solskjaer, of course, could supersede him, assuming that, as he suggested last week, Ed Woodward is much more inclined to back him than sack him – but, lacking the opportunity and funds granted to the Norwegian at Old Trafford and Mark Hughes at Manchester City, Bruce has assembled a more than respectable record.

He and Neil Warnock share the record of four promotions to the top flight. He took Hull to the only major cup final of their history. He has got Sunderland’s only top-10 finish in the last 18 Premier League seasons. At different points, he overachieved with Birmingham, Wigan and Hull.

Others may have had more eye-catching feats. Strachan’s feat of finishing eighth while reaching the FA Cup final with Southampton was admirable. Hughes came closer to sustaining success at Blackburn, with three consecutive top-half finishes, two in the top seven, plus three semi-final appearances. McLeish won a trophy, though he did get relegated in the same season. Bryan Robson took Middlesbrough to two cup finals and a demotion in a surreal campaign.

But Bruce’s longevity is a reason to plump for him (or, alternatively, to name him the best of a bad bunch). He is still going, in his 10th job, in his 22nd season of management and with the distinct possibility he will reach 1,000 games in charge. Ferguson was relentless, a trait Bruce may have inherited. Long after Paul Ince or Keane last managed, at a point when Robson, Strachan and McLeish surely will not do so again and when Hughes feels toxic, he is still going, willing to take Championship jobs, rarely really failing anywhere. A younger generation, with the blink-and-you-missed-them reigns of Gary Neville and Paul Scholes, are unlikely to show his staying power.

Bruce has adapted to the circumstances in a way to mean that his teams rarely resemble Ferguson’s. Solskjaer has sought to restore an ethos at Old Trafford, by prioritising pace and youth, by looking for thrilling counter-attacking, though his side’s problems in possession and return of under a goal a game for months shows an idea is easier to voice than implement.

Bruce has been rather more pragmatic. So was Strachan, another whose aim was often simply to stay up and whose greatest influence, he openly said, was Howard Wilkinson, not Ferguson. While McLeish's Rangers side entertained, his name became a shorthand for negativity.

Ferguson looks more a one-off than a man who spawned disciples and formed dynasties. His former players have more relegations than top-six finishes as Premier League managers.

Bruce will notch up 400 top-flight games in charge, when he comes up against his old club on Sunday. He has won 111, giving him a 28% win rate that is still higher than Robson’s, Keane’s or McLeish’s 24% ratio, even if Hughes, Strachan and Solskjaer boast better averages. All played for the greatest winner of all and each has lost far more than he won in the division the great Scot conquered 13 times. It is the paradox of Ferguson’s protégés.