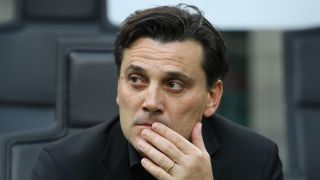 Second-half goals from Edin Dzeko and Alessandro Florenzi were enough to secure a 2-0 win for Roma at AC Milan as Eusebio Di Francesco increased the pressure on his friend and San Siro counterpart Vincenzo Montella.

Clear chances were at a premium for much of a match that was billed as a direct contest between the two coaches, who remain close after winning the Scudetto together at the Giallorossi in 2000-01.

The Milan boss had joked before the game about Carlo Ancelotti, sacked by Bayern Munich last week, joining him as an assistant but the availability of a Rossoneri great could give the incumbent real cause for concern should recent struggles continue for his team, who finished the match with 10 men when Hakan Calhanoglu received a second yellow card in the 80th minute.

Milan underwent an expensive makeover in the off-season but have now lost their last two league matches and trail the early Scudetto contenders in seventh spot.

Roma meanwhile are fifth thanks to their fourth league victory in succession.

Stern tests await both teams after the international break, with the Rossoneri due to face in-form neighbours Inter in the Milan derby and Roma set to host table-topping Napoli at Stadio Olimpico.

A spirited start to the game quickly descended into scrappiness and it took until the 17th minute for either team to register a shot on goal, Kevin Strootman's speculative attempt from long range sailing wide after a poor Gianluigi Donnarumma clearance left the Milan goal unprotected.

Roma called the keeper into action three minutes later, Donnarumma saving easily from Florenzi, who failed to catch a strike cleanly after a good run and pass from the outside of Aleksandar Kolarov's boot.

Milan were restricted to long-distance half-chances for Franck Kessie and Calhanoglu, while Roma were forced to withdraw Strootman after just 30 minutes, Lorenzo Pellegrini replacing the Netherlands midfielder.

The substitute tested Donnarumma when he burst into the area with four minutes to go in the half, but the killer blow was lacking once again as the break arrived with the deadlock intact.

Milan improved after the break and twice went close to opening the scoring just after the hour mark.

Andre Silva narrowly failed to connect with a cross to the back post and Leonardo Bonucci's fierce strike drew a good save from Alisson either side of Donnarumma denying Florenzi one-on-one.

Nikola Kalinic was the next to threaten, holding off Kostas Manolas before turning and shooting straight at the Roma keeper from close range.

But it was Roma who finally pounced, Dzeko receiving a pass from Pellegrini and benefiting from a deflection to beat Donnarumma with a powerful effort from outside the area in the 72nd minute.

There did not appear to be much on, but wriggles free on the edge of the box and finds the corner brilliantly! Daje Roma!! October 1, 2017

And Florenzi settled it five minutes later, following up a Radja Nainggolan strike to slot home the rebound from close range, his first league goal in 18 months.

Milan's situation worsened when Calhanoglu's foul on Nainggolan earned him a second booking, leaving the hosts unable to mount an attempted comeback in the closing exchanges.