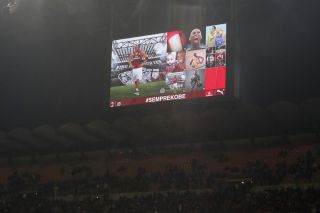 AC Milan paid an emotional tribute to Kobe Bryant ahead of their Coppa Italia match with Torino at the San Siro.

Bryant and his 13-year-old daughter Gianna died along with seven other people in a helicopter crash in the Los Angeles hills on Sunday, and the Milan and Torino players wore black armbands in honour of the NBA great.

A video was displayed on the big screen showing photos and video clips of Bryant and his daughter, with the hashtag #SempreKobe (#AlwaysKobe).

The 41-year-old grew up supporting the club after his father moved the family to Italy where he played basketball professionally.

Both sets of supporters broke into applause in the 24th minute of the game, recognising the number Bryant wore in NBA.