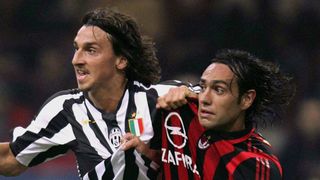 There are only a handful of clubs in the world that are steeped in as much history as Juventus and AC Milan, two of Serie A's crown jewels.

Between them they have claimed 51 Scudetti, while there have been countless memorable clashes involving the clubs down the years.

Milan may be enduring a difficult season, but both have squads full of talented players, adding to a long list of superstars to have graced this fixture.

With Juve heading to San Siro on Saturday hoping to inflict further misery on the under-pressure Vincenzo Montella and big-spending Milan, we look at the history of the match-up with the help of Opta.

No current players are in the top five for either club, with Alessandro Del Piero (7) and Andriy Shevchenko (6) the most recent entrants.

Felice Borel and Giampiero Boniperti lead the way for Juve with nine goals, but neither can rival Jose Alfatini, who scored 13 times against the Turin giants – whom he later joined – between 1958 and 1965.

Paulo Dybala goes into the match in fine form and he will be expected to add to his overall haul of two against Milan.

It has been quite a while since Milan racked up a noteworthy run of victories against Juve in the league, with their best effort being four successive Serie A triumphs between November 6, 1960, and March 11, 1962.

In contrast, Juve's best streak against the Rossoneri is far more recent, perhaps an indication of the latter's fall from grace. The Bianconeri enjoyed a run of seven consecutive league wins over their great rivals from April 21, 2013, to April 9, 2016.

Given Juve's successes since the turn of the century, it is perhaps unsurprising to learn that Milan's biggest league win against them is by no means recent.

That does not make their 7-1 win over the Old Lady in February 1950 any less impressive, though. Their famous 'Gre-No-Li' Swedish trio of Gunnar Gren, Gunnar Nordahl and Nils Liedholm starred with five goals between them in Turin.

Juve's record victory in this fixture came 47 years later in April 1997 – Vladimir Jugovic and Christian Vieri getting two goals each in a 6-1 thumping at San Siro.

Since the start of the 1994-95 season, there have been a host of world-renowned players to grace this fixture, many of whom have done so numerous times.

Gianluigi Buffon has been the most regular player, featuring 26 times, one more than Del Piero and two more than Paolo Maldini, who leads the way for Milan.

The only current players in the top five for either team are Giorgio Chiellini (16) and Claudio Marchisio (15).