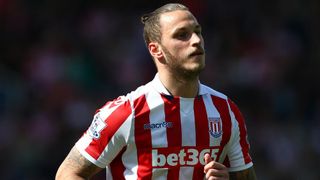 Adam, formerly of Blackpool and Liverpool, said the transfer rumours surrounding the Austria international could unsettle the Stoke dressing room.

Arnautovic's contract expires in 2017 but the 27-year-old has refused to commit to Stoke.

"We have a situation at the moment. You want to know what's going to happen because we might lose one of our best players from last year, Arnautovic.

"We want to know as players what's going to happen because he was a key success for us last year and he would be a key man again in the future. We want to know is he going to be here? It's down to the club to make the decision. He has a year left on his contract and we'll see what happens.

"He would be a big loss for us … and players do talk."

Arnautovic scored 12 goals in 40 appearances across all competitions last season before a disappointing campaign with Austria at Euro 2016.