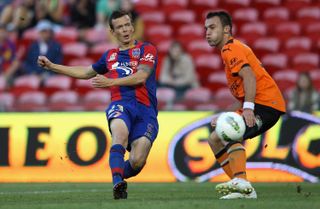 Griffiths, who has been without a club since leaving Chinese second-tier outfit Beijing Baxy, has been back in Australia and trained with the Jets earlier this week.

The 32-year-old was hoping to link with the Jets if Nathan Burns was forced to head back to Korean club Incheon United after his loan deal ends this weekend.

But with that situation still up in the air, the Reds swooped to sign Griffiths pending a medical.

"Ryan is an experienced player who Josep (Gombau) feels will suit our game and believes will be a very valuable acquisition adding depth and flexibility to the squad," Adelaide general manager Michael Petrillo said.

Griffiths is expected to arrive in Adelaide on Wednesday night and could be available for Saturday's difficult trip to league leaders Brisbane Roar providing his international clearance comes through in time.

The former Socceroos attacker will provide a timely boost to the Reds who are struggling with a number of injuries to key attacking stars.

Bruce Djite (groin), Fabio Ferreira (groin) and Sergio Cirio (hamstring) will all miss the clash with the Roar at Suncorp Stadium, while Marcelo Carrusca (knee) is in doubt and Jake Barker-Daish is away with the Australian under-22 squad in Oman.

"I would have preferred to stay in Newcastle. I have always tried my hardest for the club and it felt like home but I didn't really want to be second choice," Griffiths said in the Newcastle Herald on Wednesday.

"Adelaide came in with a good offer out of left field. It wasn't my intention to go to another A-League club and I hope the Jets fans forgive me.

"But Adelaide were really keen and made a big effort to get me on board. It was nice to be really wanted."

Griffiths has a good goal-scoring record in the A-League and scored 19 goals in two seasons with the Jets before moving to China.

Meanwhile, injury has seen Sydney FC release Panamanian attacker Yairo Yau, opening the door for the club to bring in a new midfielder for the remainder of the season.

Yau has a long-term leg injury which was set to sideline him for the rest of the season, with both parties agreeing to end his loan spell on Wednesday.

The decision is set to pave the way for the Sky Blues to bring in Serbian midfielder Milos Dimitrijevic for the rest of the campaign.