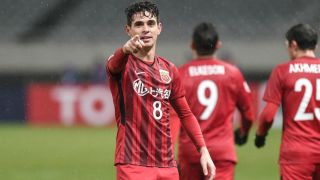 The Brazil international's double kept the Chinese Super League side two points clear of their opponents on a day of action that produced three draws, with Kashima Antlers the only winners.

Although Ulsan restored their lead through Kim In-sung, again Oscar offered a swift response and curled a fine 20-yard effort beyond Oh Seong-Hoon, with neither side then able to find a winner.

FULL-TIME | Shanghai SIPG (CHN) 2-2 Ulsan Hyundai FC (KOR) are the first team to stop Shanghai from winning in Group F of the !March 7, 2018

Before the top two in the group faced off, Leroy George's 93rd-minute penalty kept Melbourne Victory's hopes of qualification alive as they claimed their own dramatic 2-2 draw at Kawasaki Frontale.

Besart Berisha equalised after Elsinho broke the deadlock for the hosts, but it looked as though Frontale would take all three points thanks to Kyohei Noborizato's strike until George's last-gasp intervention.

It was another miserable day for fellow A-League side Sydney FC, though, as they were beaten by Kashima Antlers at Allianz Stadium and still wait for their first win of the group stage.

Goals late in either half from Shoma Doi - netting a cute flick - and Naomichi Ueda secured a 2-0 away win and took the J-League outfit to the top of Group H.

Suwon Bluewings are second behind Kashima, a point ahead of Shanghai Shenhua, after they played out a 1-1 draw at home to Wu Jingui's men.

Giovanni Moreno, a half-time substitute for Shenhua, scored from the penalty spot with just under 20 minutes remaining to cancel out Lee Ki-Je's thunderous long-range opener.