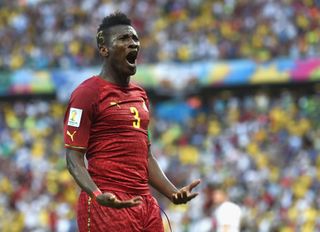 Ghana were knocked out in the group stages after taking just one point amid rumours of a row over match fees, while Kevin Prince-Boateng and Sulley Muntari were both suspended by the GFA for breaches of discipline.

Appiah was in charge as Ghana started the rebuilding process by taking four points from their opening AFCON qualifying Group E encounters with Uganda and Togo last month, but the reprieve proved short lived.

The Black Stars have yet to announce a full-time successor, although a five-man shortlist consisting of Michel Pont, Patrick Kluivert, Marco Tardelli, Avram Grant and Juan Ignacio Jimenez has been comprised.

Somewhat surprisingly, there was no place for former Ghana boss Milovan Rajevac, who led the team to the 2010 World Cup quarter-finals and was one of favourites to take the role.

Ghana Under-23 coach Maxwell Konadu will be in the dugout for Saturday's match - which is being played in Casablanca due to the breakout of the ebola virus in West Africa - after being named temporary coach.

Ahead of the clash, captain Asamoah Gyan insisted Ghana are fully united and are desperate to restore some pride to the national team.

"The training was good and all the boys have responded positively to the training since we arrived here," Gyan told the GFA's official website.

"Our key mission here is to win the match against Guinea and from this training session you can see the players are determined to make Ghana proud and qualify for the Africa Cup of Nations."

Milan midfielder Michael Essien is still missing from Ghana's 23-man squad as he continues to ponder his international future.

Guinea started their qualifying campaign with a 2-1 victory against Togo, but lost 2-0 to Uganda in their next match.

Head coach Michel Dussuyer has called on regulars such as Kevin Constant of Trabzonspor and Ibrahima Conte of Anderlecht.

However, he must make do without Rayo Vallecano winger Alhassane Bangoura after club-mates expressed concerns about him catching ebola.

"I asked Guinea coach Michel Dussuyer to free me because my colleagues were scared. Rayo did not tell me [to do] anything the decision is mine," he told Rayo's official website.

"My club-mates were concerned about the ebola issue, they called me twice while I was in Morocco."