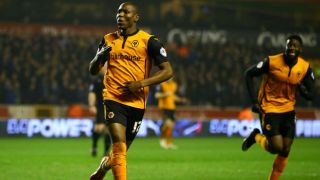 Benik Afobe says he has achieved a lifetime dream after securing a move to the Premier League with Bournemouth.

The former Arsenal trainee was officially unveiled by the Cherries on Monday after completing his move from Wolves – worth a reported £10million – and the forward could make his debut against West Ham at the Vitality Stadium on Tuesday.

Afobe was on the books at Arsenal from 2001 to 2015 without breaking into the Gunners' first team.

After spells on loan in League One and the Championship, he joined Wolves last January and has impressed sufficiently to convince Eddie Howe's club to part with a significant sum for his services.

The 22-year-old cannot wait to begin life in the top tier and aid Bournemouth in their effort to avoid relegation.

"Since I was about six I have always dreamed of playing in the Premier League and the manager has given me the opportunity so I'm looking forward to repaying him," Afobe said.

"The time has come when I've got my Premier League chance and I'm looking forward to hopefully taking it.

"Hopefully I can gel with my new team-mates as soon as possible, work hard, keep improving as a player and I'd like to think I can help keep this team up."

Bournemouth face Afobe's boyhood club Arsenal on February 7 but the striker's focus is firmly on the immediate task at hand – including games against fellow relegation battlers Norwich City and Sunderland.

"I know we've got three or four games before that but it'd be nice, if I'm involved, to be in a game against Arsenal," said the frontman, who opened up about the conversations he held with Howe prior to signing for the south coast club.

"I'm someone who wants to score goals so hopefully goals are the main thing. If I can bring goals for the team then that's something that I'm definitely looking forward to."