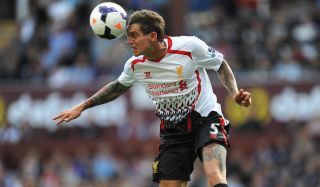 Agger has been forced out of the side by the form of centre-back Martin Skrtel, who he paired up with in his last start - their 1-0 loss at home to Southampton in September.

The Dane, 28, said he wants to get game time in the lead-up to the Christmas-New Year period or he will request a transfer out of Merseyside.

"If I don't play, and if the manager doesn't think I am good enough, that could make me leave Liverpool," Agger said.

Brendan Rodgers rejected a bid of £14.6 million from Barcelona for the defender in the off-season, which suggested he was in favour - but the Liverpool manager said he would not hand vice-captain Agger a start if he was not up to scratch.

"I've always tried to show my fairness with players," he said.

"If you are playing well you'll play. If you're not, you'll be in and out of the team.

"I've got an international captain (Agger) sitting on the bench but that's because I like to think I'm fair and if people are playing well they play.

"Martin (Skrtel) has been outstanding.

"I think in the run of games he's had he's gained confidence and that's meant I've acknowledged and recognised that he's playing at a really good level."