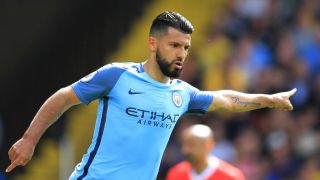 Sergio Aguero made the 2016-17 campaign his most prolific in Manchester City colours with a first-half brace on the final day of the Premier League season at Watford.

Aguero netted his 32nd and 33rd goals in all competitions in between efforts from defensive duo Vincent Kompany and Fernandinho, with Pep Guardiola's men running riot to establish a 4-0 half-time advantage at Vicarage Road.

The 28-year-old's return outstrips his 32 strikes from the 2014-15 season, a figure he reached in 42 appearances. He has played 45 times across the Premier League, Champions League, FA Cup and EFL Cup this time around.

Aguero's second of the game made him the fifth player to score 20 times in three consecutive Premier League seasons after Alan Shearer, Thierry Henry, Ruud van Nistelrooy and Harry Kane.