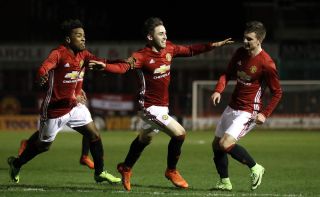 Aidan Barlow has swapped Old Trafford for the Arctic Circle as the teenager looks to impress Manchester United and make headway on foreign soil like former England team-mate Jadon Sancho.

Norwegian side Tromso are the northernmost top-level football club in the world and the talented 19-year-old United academy graduate’s temporary home.

Like so many young British players, Barlow took the decision to leave home comforts in the pursuit of progress and last month traded development level football for regular first-team game time.

A relegation fight in Norway looks a somewhat surprising step for the England youth international, but he has no regrets about heeding United coach Mark Dempsey’s advice as he looks to push himself.

“The move came about through Mark Dempsey,” Barlow told the PA news agency. “He used to work here and they showed interest.

“He just said, ‘I think you should take it, it’ll suit you, you’ll gain a lot from it’, so I just took his advice.

“I think I did (need to make that step), which is why I took the opportunity straight away.”

The midfielder has scored one goal in four appearances for the Eliteserien strugglers so far, with Parry keeping in touch each week and every performance tracked by his parent club.

“It’s good, it’s good so far,” Barlow said, having moved away from the north west for the first time.

“The weather is not bad – it’s just like Manchester, so it’s not so bad.

“There’s not many people, it’s very small, but all the people speak English and everyone is nice, so it’s just easy-going.

Buzzing to score my first professional goal, gutted to settle for a draw and not come away with all 3 points✌🏻❤️ pic.twitter.com/TjQFY0InaE— Aidan Barlow (@AidanBarlow) September 1, 2019

“I just want to play every game possible here, score as many goals as I can. Just make sure the club stays in the league and I think that’ll be good.”

A number of United fans have come to show their support for Barlow at Tromso, where he is enjoying the overall experience and learning a lot playing alongside the likes of ex-Blackburn midfielder Morten Gamst Pedersen.

The teenager has been taken aback by the Reds’ support base in Norway – “virtually everyone here is passionate for United,” he said – and the return of Ole Gunnar Solskjaer has increased interest in the club even further.

The 1999 treble hero’s place in the Old Trafford dugout also gives Barlow hope of making an impact back at his boyhood club.

“I didn’t speak to him much about it but he knew I was coming here and he said it’ll be good for me,” the 19-year-old said of Solskjaer.

“The goal is to do well while I’m here and obviously look for the first team at United because there’s opportunities there.”

There is a steely determination about the United academy graduate as he finally gets a taste of senior football and looks to kick on like some of his former England youth team-mates.

Part of the England Under-17s squad at the European Championships two years ago, Barlow replaced Callum Hudson-Odoi in the final and was the only Young Lions player to convert his penalty in the shoot-out loss to Spain.

The Chelsea star has since gone on to become a senior England international, like fellow starter Sancho – a player Barlow cites as in inspiration as he looks to make an impact abroad.

“I think the opportunities are there and people are willing to take it,” he said.

“As an example, Jadon Sancho took his opportunity and look at him now and I think quite a few players are doing that.

“I’ve come here and I’ve not found it that hard.

“I still keep in contact with everyone back home so it makes it easy.”