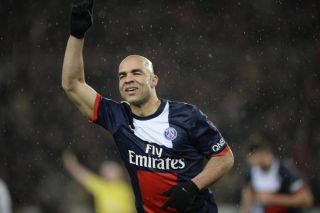 The 31-year-old looks set to end his two-and-a-half year stay in Ligue 1 as Milan look to rebuild after a disappointing 2013-14.

Exact details of his transfer to the Italian giants remain unclear and no official announcement has been made, but, in an interview with Milan's own TV station, Alex spoke of his hopes in the coming season.

Alex arrived in Italy to finalise the move and believes Milan can make a swift return to the UEFA Champions League after finishing eighth last term.

"I'm very happy to be here, people have spoken very well to me about the club," he said.

"I am really happy to be at an important team like Milan. My first impression is marvellous, everything is very well organised here.

"I've been with (vice-president) Adriano Galliani until now, we talked a lot and I am very excited.

"We need to start the season as well as we can in order to get Milan back to where they deserve to be. That is the Champions League.

"I will give my everything to fight hard to win with Milan."