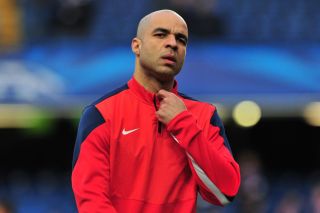 The Brazilian defender completed his move from Paris Saint-Germain in June and was officially presented to the media on Friday.

With new coach Filippo Inzaghi tasked with improving Milan's eighth-placed finish in Serie A last term, Alex feels he can play a part in strengthening their defensive ranks.

Milan shipped 49 goals last term but, in his first foray into Italian football, Alex wants to help repay fans for the welcome he has received.

"This season we will put in a lot of effort, while the fans will support us. Yesterday [at the pre-season launch at Casa Milan] it gave me chills throughout the reception," he said.

"We will work hard to repay all this affection [and] I am sure I can lend an important hand to the team, I will bring to them my experience.

"With work and commitment we will also fight for the Scudetto.

"Tactically, we are already working on avoiding conceding these goals.

"If we want to win then we cannot concede so many goals."

Alex follows in the footsteps of former PSG team-mate Thiago Silva, who played for Milan between 2009 and 2012.

The 32-year-old added that his countryman had only positive things to say about Milan - a contributory factor in his decision.

"We have talked much about Milan together, the talks were long. He always spoke well of this team and the environment, and he also drove me here," he said.