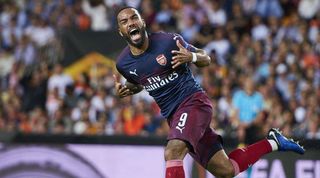 According to AS, Lacazette's varied contribution and 'classy' style of play is seen as the perefect fit for Atletico.

Atleti previously came very close to signing Lacazette while he was at Lyon, but the deal fell through because of complications with payment installments.

However, it will not be technicalities that prove stumbling blocks this time around, but rather the fact Arsenal reportedly don't want to sell.

It was reported recently that Arsenal are looking to extend both Lacazette and Pierre-Emerick Aubameyang's contracts this summer in matching £250k-per-week deals.

Diego Simeone is beleieved to be a big fan of Lacazette and can see his combative side helping him fit into Atleti's physical style.

The Frenchman has 19 goals and 13 assists this season and still has the Europa League final against Chelsea to play.