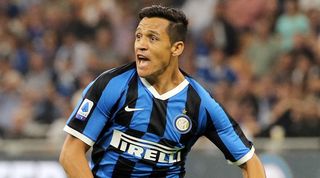 Alexis Sanchez says he is “falling in love with football again” after joining Inter on a season-long loan from Manchester United.

The Chile international moved to Old Trafford in a swap deal in January 2018, with Henrikh Mkhitaryan heading to Arsenal in exchange.

Sanchez failed to impress in Manchester, though, scoring only five goals in 45 appearances in all competitions.

United sanctioned his departure on a season-long loan in August, and Sanchez is relishing the chance to play under Antonio Conte at San Siro.

“Coming to Inter was a bit like falling in love with football again,” he told UEFA.

“I already knew the coach and some of the players, and I believe that the club are preparing something beautiful for the future.

“If I'm not mistaken, Inter haven't won anything for seven or eight years. It was a bit like finding my love for football again, together with my desire to win something with this club.”

“Any player would like to win the Champions League. You play in it to win it, not just to compete. I play it to win it.”

Sanchez will return to Barcelona with Inter on Wednesday, as Conte’s side attempt to bounce back from their 1-1 draw with Slavia Prague on matchday one.

The Chilean spent three years at the Camp Nou between 2011 and 2014, winning a La Liga title and a Copa del Rey before joining Arsenal.

Barcelona have had a mixed start to the 2019/20 campaign, but Sanchez has stressed the need for Inter to be clinical when they take on Ernesto Valverde’s charges.

“If we have one or two chances, we can’t waste them. I played there with United [a 3-0 defeat in the second leg of their quarter-final clash last term] and we wasted three or four clear chances. If you want to beat Barcelona, you can’t throw any clear chances away.”