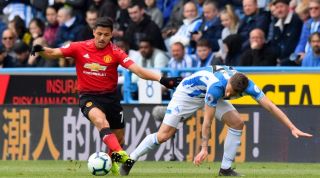 The Chilean’s wretched spell at Old Trafford looks set to come to an end this summer after a forgettable season in which he has scored just one Premier League goal.

Inter have been linked with a move for the 30-year-old and Thursday’s Gazzetta dello Sport reports that his agent Fernando Felicevich was in Milan over the last few days.

Felicevich visited San Siro to watch Milan’s Serie A victory over Bologna and also met with Inter directors to discuss the viability of a move.

United are willing to let Sanchez go on loan with the right to buy, but Inter are understood to prefer an outright sale.

The former Barcelona forward wants a new challenge at a big club and would happily return to Italy, where he starred for Udinese from 2008-2011, were it not for the problem of his mammoth wage demands.

A move to Inter therefore remains a remote possibility as things stand, as the Nerazzurri have other priorities to bolster their attack.

Those include Roma’s Edin Dzeko, who could arrive for €20 million, or Romelu Lukaku, although the costs involved in signing the Belgian could be too much.

However, before anyone is brought in a decision must be made over the future of Mauro Icardi, who was stripped of the captaincy after coming to loggerheads with the club over contract talks earlier this season.

The report says it is unlikely that anyone will trigger the Argentina international’s €110 million release clause, which is valid for foreign clubs only and up until July 15, adding that he is likely to be sold for a fee in the region of €70-80 million.