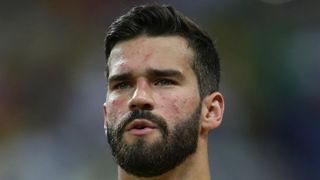 With speculation rife about Liverpool lodging a bid for Roma goalkeeper Alisson Becker, one tweet caused a stir on Tuesday - but it was a case of mistaken identity.

American actress and comedian Alison Becker, who has starred in TV shows like MTV's Boiling Points and NBC's Parks and Recreation, picked up on the unfolding news story and put the cat among the pigeons with her message on social media.

With a tweet that simply said "Excited to announce that I will be joining Liverpool as a goalkeeper", the American Becker garnered over 9,000 retweets and 46,000 likes, adding to the media storm around a potentially record-breaking transfer for the Brazil international stopper.

Once the sports world had cottoned onto the joke, she followed up with a self-deprecating tweet saying: "I 'get' sports so hard."

Excited to announce that I will be joining Liverpool as a goalkeeper!July 17, 2018