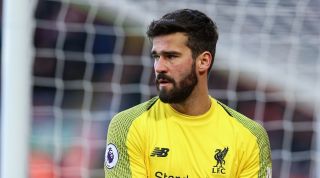 Alisson Becker has called on Liverpool to use the pain of finishing second in the Premier League last season as motivation this term.

The Reds amassed the highest points tally in the club's history in 2018/19, yet they still finished behind Manchester City in the title race.

Jurgen Klopp's side have made a superb start to the current campaign, though, and could move eight points clear of the chasing pack with victory over City on Sunday.

And Alisson believes his team must use last season's near-miss to their advantage this time around, as the club attempts to win its first championship crown since 1990.

"In the end it is just three more important points, but Manchester City have been the best team in the league for the last few years so we need to give everything to win this game.

“We do not want to feel how we felt last season. Being second by just one point – and we do not know which game made us lose the title because we had a few draws where we could have done better, and we had the loss away to Man City when we could have won or drawn – means we know that we need to give everything in every game if we want to become Premier League champions. We want it and we will try to do it.”

Liverpool have not tasted defeat in any of their last 45 games at Anfield, where City have won only once in the Premier League era.

12 hilarious times outfielders went in goal (including the chairman's son