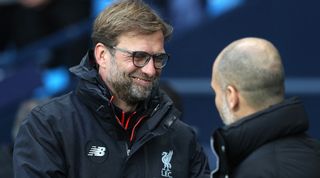 A comeback had been completed, victory snatched from the jaws of defeat and Kyle Walker, with an assist and a goal, had produced perhaps the most effective attacking performance of his career. Pep Guardiola had much to talk about after his Manchester City side beat Southampton. Among other things, he arrowed in on Sadio Mane, the architect of an even later Liverpool comeback at Villa Park, and his supposed diving.

Perhaps it was a sign of how much Liverpool have got into his head. Jurgen Klopp’s response was comparatively mild, defending Mane, implying Guardiola has a fixation with Liverpool and adding: “I promise not to mention tactical fouls”. Even that was the exception to the rule. Klopp tends to lavish City with praise, branding them the best team in the world in September, or to ignore them.

All of which may have tempted Guardiola to borrow a tactic from an old foe’s blueprint and wade into the murky world of mind games. Because the only time he has really lost a title race was when Jose Mourinho waged psychological warfare. Guardiola was exhausted by it, announcing his resignation as Barcelona manager. He was drained by the intensity and damaged by Mourinho’s incessant, increasingly successful attempts to get under his skin.

A caveat is required. There are two seasons in management when the Catalan has not won the league title: 2011/12, when his Barcelona were pipped by Real Madrid, and 2016/17, his first at City. Yet it is not merely making excuses to say that ageing group, in need of a radical makeover, was not really his City team. They were out of the title race by January, which is not to diminish the achievement of Antonio Conte and Chelsea in winning it.

But if Klopp and Liverpool maintain their current lead, they will be in select company: just them and Mourinho’s Real, alone in halting sides shaped by Guardiola’s principles and executing them with excellence over 10 months. The Catalan has started to say that he would rather win the Premier League than the Champions League which, if few actually believe it, at least reflects the theory that it is harder to stop a side over 38 games than with the vagaries of knockout football.

And only Mourinho has truly done that. It was the last feat in his golden decade: 2002-12, featuring two Champions Leagues with clubs who had not conquered Europe for 17 and 45 years respectively, plus seven league titles in four countries. There is a case for arguing his biggest achievement was not securing the only Champions League won by a club, in Porto, outside Europe’s top five divisions this millennium or Inter Milan’s historic treble but dethroning arguably the greatest club side ever in Spain. Perhaps no one else could have done that then; even in the hypothetical scenario of transporting managers from another club and another time, it is hard to imagine too many triumphing at the expense of Guardiola’s Barcelona in a season when Lionel Messi scored 73 goals.

It was understandable that Guardiola’s time in England would be framed in the context of Mourinho. Appointed in the same year, in the same city, they were supposed to be the dominant duopoly. Which, even though Manchester City and Manchester United came first and second respectively in 2018, they have not been. Mourinho was sacked in sixth, unable to compete with his old enemy.

Instead, the defining rivalry has been one largely lacking in personal vitriol: Guardiola against Klopp. There have been fewer red cards – at one stage, whether at Inter or Real, Mourinho had a player sent off in five successive games against Guardiola’s Barcelona – and no eye-poking, unlike the Portuguese’s 2011 assault on Tito Vilanova. Klopp’s Liverpool have not concentrated on stifling and spoiling, but on scoring.

With Inter, Mourinho knocked Guardiola out of the Champions League with 18% possession. With Liverpool, Klopp did it by scoring three goals in 19 minutes. If that is a simplification, ignoring Inter’s first-leg goals, it is also an indication of contrasting tactics and differing theories, of how the game has changed since Mourinho was in his prime and how managers like Klopp have made him look outdated now. If Guardiola ended one era, of the cautious counter-attackers, he is now challenged in another, by the high-speed pressers. If Mourinho tried to attack Guardiola with his words, Klopp sometimes kills him with kindness.

The sense was always that Mourinho was the scourge of Guardiola. But he has five victories against the City manager. Klopp has eight. Each, perhaps, has cost the Catalan a Champions League, in 2010 and 2018 respectively. But if Klopp secures a Premier League at his expense as well, it will be undeniable he is Guardiola’s greatest opponent.