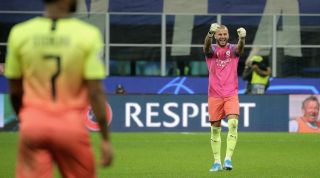 Sure enough, adulation followed. Team owner Kiril Domuschiev promised to name a stand at the club's new stadium in Moti's honour, while local restaurants started naming dishes after him.

Known as 'The Chief' in his native Johannesburg, Radebe started his career in goal for the ICL Birds. This came in handy for the Premier League clash at Old Trafford in April 1996 that was notorious for the beginning of the Fergie-Keegan mind games. John Lukic had been dropped from Leeds' squad after six defeats in seven matches, so when Mark Beeney was sent off for handling outside the area after 17 minutes, Radebe was summoned from central defence.

He'd done it only a month earlier against Middlesbrough and excelled here too, repelling efforts by Andy Cole, Brian McClair and Ryan Giggs. Only Roy Keane managed to get one past him. Post-match, Fergie bellowed: "I can't understand Leeds United. Their manager doesn't deserve to have his players playing like that only when they come to Manchester United.”

Manchester United fans applauded the ex-Kaizer Chiefs stopper off the pitch. “Quite something for a Leeds player!” he reflected with FFT later. "I made two great saves."

Where to even begin with this game? Tottenham won 5-1 on an evening stroll at White Hart Lane, with Kane smacking a hat-trick and Erik Lamela stealing the show with his glorious rabona goal.

But then something weird happened. Hugo Lloris was shown his marching orders in the 87th minute, and with no subs left, Kane took the Frenchman’s place in goal. But he shouldn’t have bothered: his first act was to let Jeronimo Barrales's feeble free-kick squirm under his body and in.

Maybe let Jan Vertonghen do it next time, Harry.

In the days before substitute goalkeepers, Leicester’s No.1 Mark Wallington was taken off midway through the first half of this FA Cup quarter-final after a savaging by Shrewsbury legend Chic Bates. "Mark had a huge hole in his thigh from that and it was amazing Chic wasn't sent off,” said centre-forward Alan Young, who took over green jersey duties. “Mark tried to limp on but we conceded two goals as he couldn't move.”

Young was then knocked unconscious early in the second half after a collision with Bernard McNally. Enter Steve Lynex, a right-winger who looked like the second coming of Frank Worthington.

Young eventually came back on an as an outfield player and Foxes manager Jock Wallace put him back in goal (still with us?), while Lynex returned to the right wing. Leicester ran away with it 5-2 and celebrated the 30th anniversary of the game in 2012 with many of the alumni.

Graham Taylor’s Watford were dealt a double blow when moustachioed custodians Tony Coton and Steve Sherwood were both declared unfit before the FA Cup semi-final against Tottenham at Villa Park in 1987. An 18-year-old David James was deemed too young so it was Gary Plumley, the chief executive’s son and Welsh wine-bar owner, who got the nod.

Plumley had only played once as an emergency keeper for Ebbw Vale in the previous two years. He was beaten three times in the first half-hour as Clive Allen continued his scoring rampage. After the 4-1 loss, Plumley immediately drove back to the bar in Newport where his first customers were a pair of Spurs fans who insisted on buying him a drink.

He did get renumerated by the Hornets. "They sent me a cheque and we went straight out and bought a fridge with it. It still works. We call it the Watford fridge." Cool!

Funnily enough, Richardson wasn't expecting to don the gloves in a Football League match at the age of 46.

"You don't think it's going to happen, but you just prepare yourself," he said. "If I'd gone out there and had an absolute stinker, it's not going to bother me. I'm 46, my career's done."

Luckily for him, though, he didn't: in fact, Richardson kept a clean sheet in Wycombe's 1-0 win after replacing the injured Alex Lynch 15 minutes into the game. The Chairboys were already 1-0 up but Richardson helped keep it that way, in what was his first game in over a decade.

"In an ideal world we'd have a couple of young development goalkeepers, but when I first came in the gaffer said to me 'will you sit on the bench?'... which I've done at most clubs when needed," he chirped.

Next: The 'goalkeeper' who wasn't allowed to use his hands...

In 1982, Bordeaux club president Claude Bez took umbrage at the French Football Association’s one-year ban on goalkeeper Dragan Pantelic for kicking a linesman. Having already qualified for the UEFA Cup, Bez refused to name a goalkeeper in Bordeaux’s starting XI for the final league match against Nantes.

Giresse, who played in midfield for the national team 47 times, remembers: “He (Pez) told me, 'You’re the captain, you go in goal'.”

As no keeper was named, Giresse wasn’t allowed to use his hands in accordance with the rules. “I constantly wanted to run out and catch every ball,” he said. After conceding five goals in an hour without so much as a stung finger, he was relieved of his duties.

“Neil Warnock used to occasionally put on these crazy sessions when he let the keepers play outfield. One day I went in and I did so well the manager decided he didn’t need to have a keeper on the bench.”

And so Phil Jagielka’s part-time keeping shift was born. He played between the sticks four times for the Blades when Paddy Kenny was either sent off or injured. Memorably, one of those games included a spectacular fingertip save from Robin van Persie in 2006, a picture of which proudly hangs in his home.

West Ham inflicted an 8-1 defeat on Newcastle in a First Division game that saw Peter Beardsley reduced to an inferior version of Iker Casillas circa 2014. “I said to Willie McFaul at half-time, 'I'll go in goal' but he said no as I was too little,” Beardsley recalled.

Instead centre-half Chris Hedworth replaced Martin Thomas, who was becoming more unfit with each Hammers goal. When Hedworth collided with a post and dislocated his shoulder, Beardsley filled the goal with pride rather than size. “I only let in three goals – one from Frank McAvennie, one from Paul Goddard and then, most famously, a penalty from Alvin Martin.”

Martin went into the record books as the only top-flight player to score a hat-trick against three different keepers.

Diogo Acosta (Palmeiras B vs Juventus, 2010)

A game in the Brazilian third division wouldn’t normally raise an eyebrow but striker Acosta’s heroics were worth mention. Palmeiras needed a win to secure promotion in May 2010, as did rivals Juventus, who took a two-goal lead into the break.

Acosta, however, ensured the scores were levelled with 20 minutes to go. But when Palmeiras keeper Rafael Borges was sent off for throwing a haymaker, two-goal hero Acosta was forced to man the sticks. He recalls what happened next: "I saw their goalkeeper running back to goal, after trying to get his head on the corner. I know the pitch at the Rua Javari is small, so I decided to try a shot."

His punt went over the retreating keeper, bounced a few times and into the corner of the net to seal victory.

Two narrow away wins for each team in respective legs with no away goal rule in place was followed by one goalless replay, and then the decisive and dramatic five-goal glut played at Old Trafford. As West Ham keeper Bobby Ferguson was taken off temporarily for treatment in Manchester, Hammers legend Bobby Moore went in goal for 20 minutes – in which time he saved Mike Bernard’s penalty with his bare hands only to see the rebound knocked in by the same player.

Stoke prevailed 3-2 but Daily Mail correspondent Jeff Powell remembered it best. “This last act of a seven-hour semi-final was so full of flashpoint drama and raw courage that even Moore saving a spot-kick seemed scarcely out of the ordinary,” he wrote. It should have come out as a box set.

RECOMMENDED The most mental semi-final ever: when Bobby Moore went in goal... and saved a penalty

Bruce Grobbelaar had several of his walkabout moments in this Cup Winners’ Cup tie in Moscow. “Grobbelaar's 69th-minue slip had already gifted Spartak a second goal and several more ill-judged sorties off his line added up to a nightmare evening for the goalkeeper,” wrote the Guardian.

He was then sent off after conceding a penalty, leaving left-back David Burrows to take Brucie’s shirt for the resultant spot-kick. “Bugsy” Burrows had none of the presence of Warren Beatty as Spartak converted to take a 3-2 lead, which they added to in a frantic finish as the redhead was put under siege.

Graeme Souness’s observation was that Moscow were “there for the taking”. That didn’t quite ring true in the return match either, and the Reds lost 6-2 on aggregate.

QUIZ Can you name the 64 players to score for Chelsea in the Champions League?