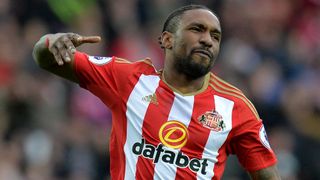 Crystal Palace are interested in signing Jermain Defoe from Sunderland if they can secure Premier League survival, manager Sam Allardyce has confirmed.

England international Defoe is in demand after Sunderland's relegation, with a clause existing in his contract that will reportedly allow him to leave for free now that his side are dropping to the second tier.

The 34-year-old has scored 14 league goals this season and Allardyce, who managed him at the Stadium of Light last season, is keen on a reunion if Palace can preserve their top-flight status.

"If we are safe and Jermain Defoe is available, and he wants to come to Crystal Palace, I would be interested," Allardyce said ahead of Saturday's away game against Manchester City.

"Until that time, when we are safe, I can't pursue that.

"When we are safe, someone else who is already safe may already have done it. Who knows?"

Allardyce was less keen to discuss Burnley goalkeeper Tom Heaton, who is reportedly a £15million target for both Palace and newly promoted Newcastle.

"I'm not interested in who will come and go," he said.

"When we are secure and safe in the Premier League, as hopefully we are, we can talk about all the agents ringing in with their players. I'll tell you if the agent is telling the truth or not."

Palace are 16th in the table, six points clear of the relegation zone with only three matches to play.