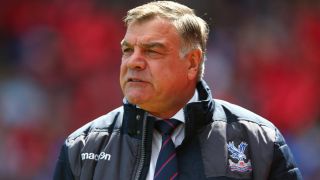 Sam Allardyce does not want to be considered as Gordon Strachan's long-term replacement for the vacant Scotland job, despite the former England manager conceding it is a "very tempting" role.

Allardyce has been out of football since May when he stepped down from his post at Crystal Palace after steering them clear of Premier League relegation.

He has been linked with numerous jobs since – including a Palace return after Frank De Boer's sacking – but is not rushing into any decisions, even with the Scotland manager's position available on a long-term basis following Malky Mackay's interim appointment.

Allardyce's last international job saw him take charge of one England game in 2016 before allegations of corruption forced his exit and, although he likes the idea of coaching neighbours Scotland, he tipped David Moyes for the job.

"It's very tempting but not at this moment in time," he told BBC Radio 5 Live.

"My parents are from Scotland and my sister and brother were both born in Scotland so my heritage is from there.

"At this stage I'm enjoying not being involved at the front end of football at the moment. David Moyes would probably be my choice for the Scotland job."

The 62-year-old is not even sure if he wants to return to a football manager's position, saying any job would have to be one in which he could enjoy "success".