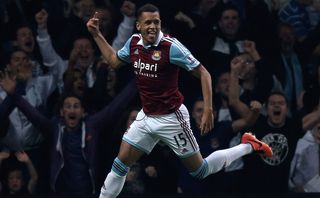 The 20-year-old moved to Upton Park from the Premier League champions in January 2012.

Morrison had been tipped to become a standout performer for the Old Trafford club, but was sold amid fears over his application to the game off the field.

He spent the entirety of last season on loan at Championship outfit Birmingham City, before returning to West Ham in the close-season.

And he has caught the eye this term with a host of impressive performances in West Ham's engine room, including a fine solo effort in the club's 3-0 victory over Tottenham at White Hart Lane before the international break.

Allardyce says he is unaware of a buy-back agreement with United, but believes his current form could attract the attention of Morrison's former employers.

Speaking to The Daily Mirror, Allardyce said: "I don't know if there is a buy-back clause and what that figure might be if it even exists.

"But my real big worry is that Manchester United will come back to buy him.

"Look at what happened when Chris Smalling played a handful of games for Fulham - United jumped in with £10 million.

"Then there was Phil Jones when I was at Blackburn - that's what you are up against."