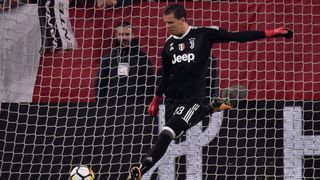 Massimiliano Allegri insists Wojciech Szczesny is the heir to Gianluigi Buffon at Juventus, despite the veteran goalkeeper suggesting Gianluigi Donnarumma should join the club from AC Milan.

Former Arsenal and Roma keeper Szczesny moved to Turin during the close season and is enjoying a run in the first team due to a calf injury suffered by Buffon.

The 39-year-old is expected to retire at the end of this campaign, with Szczesny in prime position to take his place as Juve's number one.

In an interview with Gazzetta dello Sport, Buffon said he would advise teenage international colleague Donnarumma that joining Juventus is "never wrong".

Speaking at a news conference ahead of Wednesday's Coppa Italia quarter-final against neighbours Roma, Allegri avoided such hypotheticals and offered his backing to Szczesny.

"I've said it before and I'll say it again, Szczesny is the heir to Buffon," he said.

"They respect one another greatly, both as players and as men, which is very important.

"I think the club has done a good deal buying a player who is so good a year before Gigi stops."

: "I've said it before and I'll say it again: is the heir to . They respect one another greatly both as players and as men, which is very important." January 2, 2018

One player whose immediate future would appear to be away from Juventus Stadium is winger Marko Pjaca.

The Croatia international joined Juve from Dinamo Zagreb in 2016 but has endured wretched luck with injuries over the past season-and-a-half – spending time on the sidelines with a broken leg and a torn anterior cruciate ligament.

"Pjaca will be loaned out, he needs to play," Allegri said of a player who has been linked to both Schalke and Anderlecht.

"He is a boy who has extraordinary qualities and unfortunately this injury has temporarily stopped his progression.

"So he needs to find a team where he can find continuity to return next year in the best condition."

Allegri added: "I have not asked the club for anything because the squad is competitive. Marko's exit will leave 21 players, which for the next five months is more than enough."