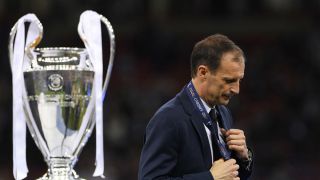 Massimiliano Allegri is targeting a return to the Champions League final for Juventus in 2017-18 but expects a tricky finish to the Serie A season to impact their hopes.

Juve are looking for a seventh successive Serie A title this term after claiming a 33rd Scudetto in May, Allegri's side finishing four points clear of Roma in second.

The league triumph came four days after securing the Coppa Italia with a 2-0 win over Lazio and under two weeks before the Champions League final in Cardiff.

A treble was not forthcoming, though, as Juve were comfortably beaten 4-1 by Real Madrid - Cristiano Ronaldo netting twice for Los Blancos.

Allegri hopes to see his side back in contention for European silverware come May 2018 when Kiev will host the final, but acknowledges a tough domestic run-in that sees them face Napoli, Inter and Roma in the final five matches will make it tough.

"All the direct clashes come at the end, and this year like never before the league will come down to the final game," he said.

"We want to try and win a seventh consecutive Scudetto, and the difference will be motivation.

"We have to raise the bar and try to get back to the Champions League final, and maybe win it this time."

Juve picked up their first triumph of pre-season on Thursday with a 3-2 International Champions Cup win over Paris Saint-Germain in Miami Gardens - Claudio Marchisio netting a last-minute penalty to secure the win.

Allegri was pleased with what he saw at Hard Rock Stadium but acknowledged Juve are still some way off full fitness.

"There were good phases of play in both the first and the second half," he added.

"We need to improve our condition, the phase on the ball, the final third, but we have time to prepare and get ourselves ready for the Supercoppa [Italiana].

"Getting to the end of the season and focusing on our goals requires the sacrifice of everyone."