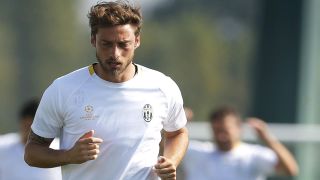 Juventus coach Massimiliano Allegri has hinted at the possibility of Claudio Marchisio returning from a six-month injury lay-off against Sampdoria on Wednesday.

Marchisio tore his anterior cruciate ligament in Juve's April clash with Palermo, ruling him out of Italy's Euro 2016 campaign and sidelining him for over six months.

The 30-year-old was named on the bench for Juve's 1-0 defeat at AC Milan on Sunday without getting on to the pitch, but it seems his comeback is imminent and Allegri expects him to have a big impact.

"One or maybe two of Marchisio, Daniele Rugani and Kwadwo Asamoah will play tomorrow, for sure," he told reporters.

"Marchisio will give us an important contribution. If he were able to play half of matches between now and January, I would be glad."

Allegri also confirmed that both Gonzalo Higuain and Mario Mandzukic will start against Sampdoria, and Giorgio Chiellini is in line to return after three weeks out with a calf problem, but Paulo Dybala will miss out.

"The attack pair against Samp will consist of Mario Mandzukic and Gonzalo Higuain," he added.

"Higuain is doing well, is adapting to the team and he sacrifices a lot. Mandzukic and Higuain can absolutely compete and play together.

"Tomorrow Higuain and Mandzukic will help us to win and make themselves available to each other.

"Chiellini ought to return for Samp. I'll make my mind up about the midfield after tomorrow's training session.

"And there'll be further medical tests for Dybala in the week. We'll do the best we can without him."