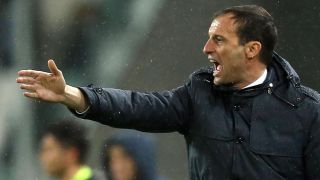 Juventus put in an "admirable" performance by beating Inter 2-0 in the Derby d'Italia on Sunday, head coach Massimiliano Allegri said.

The Serie A champions got back to winning ways in Turin after back-to-back draws thanks to goals from Leonardo Bonucci and Alvaro Morata.

Allegri was happy with his side's showing as they recorded an eighth successive league clean sheet to move four points clear of title rivals Napoli, who play Fiorentina on Monday.

"The lads did really well and it was important to take home the victory," Allegri told Mediaset Premium.

"This was an admirable performance after the intense Tuesday night game with Bayern Munich.

"Inter are a tough side and they will continue to challenge for third place."

Allegri is already looking forward to another match against Inter on Wednesday, with Juve taking a 3-0 lead from the first leg into their Coppa Italia semi-final at San Siro.

"We have moved them further away from the top, but we are already thinking about Wednesday's Coppa Italia semi-final," he said.

"I realised in the first leg that our season was changing.

"Now we have one less obstacle on our path to the Scudetto, we remain top of the table and there are 11 left.

"The more we win, the less we have left to do."

Allegri also praised the impact of his substitutes, with Morata winning and converting a penalty just three minutes after coming on.

"Players coming off the bench can be decisive," he said.

"At the end of the season whether you played more or less, everyone contributed and everyone wins."