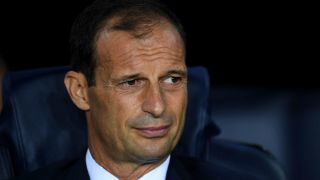 Juve shut out Barca over the course of 180 minutes as they triumphed 3-0 on aggregate in last season's quarter-final between the sides, but the LaLiga leaders found their Serie A counterparts a far less robust proposition this time around.

A brilliant Lionel Messi goal put the hosts in front towards the end of a first half as even as the second period was one-sided.

Messi created Ivan Rakitic's goal and helped himself to another as a Juve defence without the injured Giorgio Chiellini and still adjusting to life without Leonardo Bonucci provided increasingly flimsy resistance.

"We played a good first half but when you play these kind of games you have to take your chances," Allegri told reporters.

"We didn't and we were punished at the end of the first half. Ironically we conceded three goals from counter-attacks but this was our worst mistake because we had to remain compact after Barcelona's goal.

"Obviously they have this player who can change every game but we had to do better in the second half.

"You cannot expect to come here and dominate the game so we have to play better at a mental level, always trying to remain in the game even when everything seems difficult.

"If you leave spaces to Messi, you get punished."

Let's claw our way back into this match, BianconeriSeptember 12, 2017

It meant a Champions League debut to forget for Rodrigo Bentancur, who earned a maiden Juventus start.

The Uruguayan midfielder, who cut his teeth with Argentine giants Boca Juniors, was left to marvel at Messi's otherworldly talents.

"We are sad for the defeat but we gave everything we had. Unfortunately it was not enough," he told UEFA.com.

"I'm happy with my performance, the Champions League is different from the Copa Libertadores, there is more pace and better  technique."

Bentancur added: "Messi is incredible, he is a player from another planet."