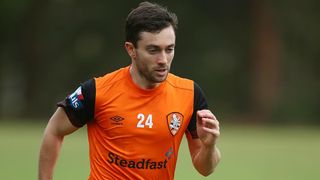 Socceroos winger Tommy Oar is set to make his first appearance for Brisbane Roar in over six years when the A-League leaders visit Melbourne City on Friday.

The 24-year-old left-footer departed Roar in February 2010 to join Utrecht in the Eredivisie after just 23 A-League appearances in an orange shirt, with Oar notching two goals in that period.

"He's travelling, so we'll travel with 17 and Tommy's part of that, and I'm sure he'll play a part," Aloisi said on Thursday.

Aloisi added: "Tommy will add to the way we play.

"We know he's very good one-v-one. He's got good delivery, he can also score goals, he's got a great left foot - and the way our players rotate, he can fit into that nicely."

Aloisi has waited two weeks to get Oar involved on game-day.

"We needed to get a little bit of fitness into him and we did that last week, we worked him hard," the ex-Socceroos striker said.

"He worked hard at the beginning of this week. He's freshened up a little bit over the last couple of days but he's an intelligent footballer - even though he hasn't been here for a long time, he understands our way of playing and our structures and he's fitted in very nicely."

Aloisi hopes to see Brisbane take another step up against City, which he claimed will be like "another final".

"Before the season started, we planned out our year and we knew that we would start to hit our top form now in March, April. So we're peaking at the right time physically and the players can feel it, and we've shown the last two games that - especially the last half-hour - we've run over both sides.

"We feel we're still improving, we're still getting better and with the addition of Tommy Oar, we can still get better."