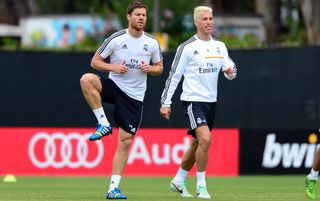 The Spain international has not featured for Carlo Ancelotti's side this season after undergoing surgery on both a groin injury and a broken metatarsal in recent months.

Alonso had cooled talk of an imminent return last week, but the former Liverpool midfielder took part in a full session ahead of the meeting with Antonio Conte's charges.

Real were further boosted as Sergio Ramos, Karim Benzema and Fabio Coentrao all joined in training after the trio sat out a session on Sunday.

The Bernabeu outfit sit top of Group H with six points from their first two fixtures.

Cristiano Ronaldo notched a hat-trick as Real routed Galatasaray 6-1 in their opening match, before the Portuguese notched a double in the 4-0 home victory over Copenhagen.

They head into the tie in good form, having beaten Malaga 2-0 at the Bernabeu on Sunday, a result that leaves them just three points adrift of La Liga leaders Barcelona.