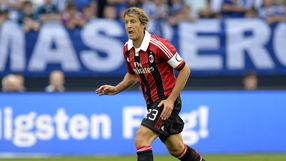 So far only 55,000 tickets have been sold, which is far down on the usual number and includes just over 23,700 Milan season ticket holders, the lowest number since 1986.

"Guys, a derby without you makes no sense. Buy tickets because we can all go together to the stadium to win this most important of games," Ambrosini said in a video released by the club on their website.

Last season a crowd of 79,612 saw title-challenging Milan beaten 1-0 by a Diego Milito goal, while the previous year 80,000 cheered on the eventual champions as they hammered Inter 3-0.

Yet just over 28,000 saw Milan win their first and only home game of the season so far, 2-0 against Cagliari on Sept. 26, the lowest attendance since Silvio Berlusconi took over the club in 1986.

Disappointing performances, Italy's economic problems and fans' disaffection at the sales of Zlatan Ibrahimovic and Thiago Silva have been blamed for keeping supporters away.

Tickets for Sunday's game are now on sale to those who do not have the controversial "tessera del tifoso", a national supporter ID card scheme that was created with the aim of curbing violence but has angered fans' groups.

"It might be the recession, the economic crisis or decline in results of Milan and Inter, but for the first time in 26 years ticket sales are slow for the derby," Milan vice-president Adriano Galliani said on Monday.

"I'm appealing to the fans to come to the stadium."

Milan are 11th in Serie A with seven points, five behind third-placed Inter and nine behind leaders Juventus.