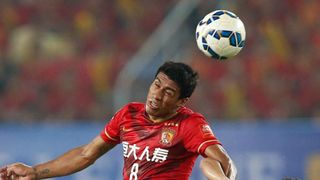 With a place against Spanish and European champions Barcelona on the line, Guangzhou looked to be heading for defeat as they trailed 1-0 with 10 minutes remaining in Osaka.

Oribe Peralta had given America the lead early in the second period, only for substitute Zheng Long to restore parity in the 80th minute.

And with extra time looming, former Tottenham midfielder Paulinho nodded in Yu Hanchao's corner to book a last-four meeting with Barca in Yokohama on Thursday.

Guangzhou had not played a competitive match since clinching the AFC Champions League title with a 1-0 aggregate victory over Al Ahli three weeks ago, but retain their hopes of sealing the treble.

CONCACAF Champions League winners America must instead console themselves with a fifth/sixth-place play-off against the loser of the other quarter-final between TP Mazembe and Sanfrecce Hiroshima.

Despite Guangzhou's star line-up, America started the game with a greater attacking intent and created the first chance of the game.

Carlos Quintero's good work through the middle resulted in Rubens Sambueza releasing a shot on goal, but the Argentinian's deflected strike was well saved by Guangzhou goalkeeper Li Shuai.

However, it did not take long for Guangzhou to muster their first opportunity as Robinho forced America keeper Moises Munoz into a save.

America came closest to breaking the deadlock in the first half when Paolo Goltz's free-kick smashed off the crossbar in the 28th minute, with Dario Benedetto failing to convert the rebound.

Benedetto had a shot from close range saved on the stroke of half-time before Goltz headed over from the edge of the six-yard box.

The Mexican side continued to press and took the lead 10 minutes into the second half when Benedetto made his way to the byline and whipped in a cross from the right, which Peralta stooped to head in from four yards.

There were chances at both ends as Feng Xiaoting and Quintero went close before Guangzhou levelled 10 minutes from time as Gao Lin teed up fellow substitute Zheng, whose weak effort from the edge of the box crept under Munoz and into the net.

Just when it seemed the game was heading for extra time, Munoz came for Yu's corner and got nowhere near the ball, allowing Paulinho to glance home and complete a dramatic turnaround for Luiz Felipe Scolari's men.