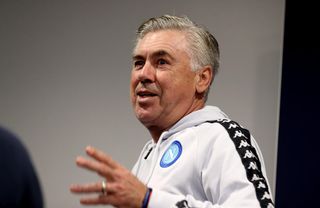 Napoli manager Carlo Ancelotti is confident his side can produce a response when they tackle Serie A surprise package Atalanta at Stadio San Paolo.

The Partenopei missed the chance to make up ground on the top three when they were held to a 1-1 draw at strugglers Spal on Sunday.

Defender Kevin Malcuit looks set for an expected spell on the sidelines after the club confirmed he had sustained anterior cruciate ligament damage to his right knee.

Despite the disappointing outcome from the trip to Ferrara, Ancelotti believes there are plenty of positives to build on.

Napoli won 3-2 at Red Bull Salzburg last week to sit top of Group E in the Champions League, ahead of defending champions Liverpool, and are now on the back of a six-match unbeaten run.

“The team is in good shape and needs to keep going,” Ancelotti said, quoted on Napoli’s official website.

“We have a big game against Atalanta on Wednesday and we need to look forward, work hard and show belief.”

Defender Kalidou Koulibaly maintains the players are ready to lift themselves for the visit of Atalanta, whose remarkable start to the new Serie A campaign continued with a 7-1 victory over Udinese.

“We are disappointed (with the draw against Spal), but we are certainly not giving up,” Koulibaly said.

“We need to react straight away and Wednesday is an important match that can move us back up the table.”

Atalanta produced an impressive response from their 5-1 Champions League defeat at Manchester City to sweep past Udinese and sit third in the table, just three points off leaders Juventus.

Despite all of the plaudits coming their way, which have included suggestions of being dark horses for the Scudetto, manager Gian Piero Gasperini is determined to keep a sense of perspective.

“We have got our feet planted on the ground,” Gasperini said.

“The compliments are very pleasing, but this Scudetto talk is purely a media invention.

“At Napoli it will be a tough but prestigious test, they give you the strength to face the others.

“We recognise the difficulties from this game, as they are the best team in the league together with Inter and Juventus, probably with the best striking options in the division, but we will see what we can do.

Gasperini told a press conference: “Regarding the table, it won’t be decisive.

“We are just 10 games into the championship, but if it goes well, it will give us a boost.”