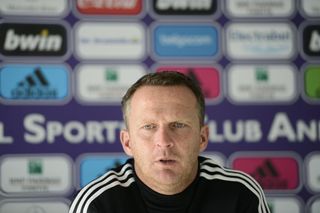 Bjorn Ruytinx's goal just after the hour condemned Anderlecht to a ninth Pro League defeat of the season in what proved to be Van den Brom's final game in charge of the club.

The former Vitesse coach took charge at the Stade Constant Vanden Stock in May 2012 and oversaw a successful defence of their top-flight title in his first season.

However, after selling the likes of Lucas Biglia, Tom De Sutter and Dieumerci Mbokani in the close-season, the champions have faltered this term and sit 12 points adrift of leaders Standard Liege.

"He made the club blow with a fresh wind, integrated some youngsters, but unfortunately failed to put together a new team after the departure of some stars," chairman Roger Vanden Stock said in a statement on the club's official website.

"At this moment unfortunately there's no other option than to thank Van den Brom for his efforts these past two seasons.

"His firing is a shared responsibility from the board, the coach and the players."

Van den Brom, who will be replaced at the helm by assistant coach Besnik Hasi, added: "This is a very difficult moment for me. I remain convinced that there is enough talent in this team.

"It is a pity that I could not finish my work, but that is just the way it is with the football world. I also want to thank the staff and the staff of Anderlecht for their help and co-operation.

"Anderlecht is a warm club (and) that makes the departure more painful."