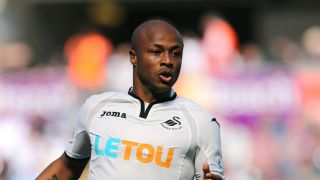 Andre Ayew has joined Fenerbahce on a season-long loan from Swansea City, with the Super Lig side holding the option to make the deal permanent.

Ayew re-joined Swansea in January after two seasons at West Ham but was unable to stop their relegation to the Championship – the 28-year-old failing to score on his Liberty Stadium return.

The Ghana international signed a three-and-a-half-year contract with the Swans but he will not be part of Graham Potter's squad looking to bounce back at the first attempt.

Ayew will travel to Istanbul for a medical on Thursday before completing the loan deal, with the move subject to international clearance.

"I understand the circumstances of the move – it's part of the restructure of us going forward," said Potter.

"From my perspective he has been brilliant. He has applied himself in training, supported what we are trying to do and been very professional.

"He has been a joy to work with and we wish him the best."