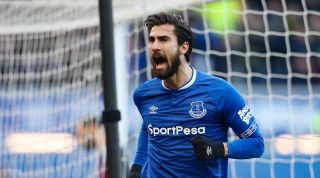 Everton have opened talks with Barcelona over the permanent signing of Andre Gomes, report The Liverpool Echo.

The Portugal international has impressed during his season-long loan spell at Goodison Park, making 26 appearances in the Premier League.

Gomes struggled after moving to the Camp Nou from Valencia in 2016, and Barcelona are willing to sell him this summer.

However, Everton face stiff competition from Premier League rivals Tottenham, who can offer the midfielder Champions League football after all but sealing a top-four finish last weekend.

And Marco Silva has admitted that Gomes has yet to make a decision on his future.

"We have to do some [work] also, it is not finished," the Toffees boss told the Echo.

"Andre's future we keep open, and not just Andre but [Kurt] Zouma also. But you asked me about Andre. His future is open and it is up to us the best we can do to sign him.

"I don't know all the details but I think we already started to do something.”

A point against Tottenham on Sunday would almost certainly be enough for Everton to seal an eighth-place finish in the Premier League.