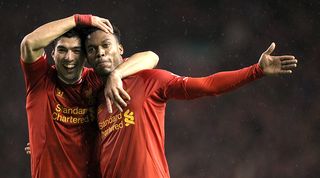 They were briefly together again. The SAS were on the Anfield turf, but they were both outgunned. Not by Lionel Messi or Philippe Coutinho, Mohamed Salah or Roberto Firmino, but by Divock Origi, the guileless, grinning assassin. Luis Suarez was booed and beaten, Daniel Sturridge a spurious substitute as Liverpool beat Barcelona 4-0 on Tuesday.

It’s five years since they were parted – five seasons in which Suarez has scored 177 club goals and Sturridge just 32. Tuesday may have been the last time Suarez plays at Anfield. It could be for Sturridge, too, who is out of contract in the summer.

It may yet be a golden goodbye, perhaps with a crucial cameo or two, against Wolves or in the Champions League final; maybe with a valedictory goal that counts for more than any he has delivered in six-and-a-half years on Merseyside. Or it could be an anti-climactic exit. Suarez’s prolific sidekick, Liverpool’s biggest name immediately after Steven Gerrard’s retirement, has become an afterthought. The deputy to Firmino’s stand-in on a seminal night.

In fairness, Sturridge has started Liverpool’s last two league games, though it was he who ballooned a shot over the bar at St James’ Park, and Origi who exerted the decisive influence. A professional predator has gone 20 games without a goal, partly because he has only started six of them. A great goalscorer may now be a scorer of great goals in the sense that his most meaningful strikes under Jurgen Klopp, in the 2016 Europa League Final against Sevilla and September’s trip to Chelsea, were both crackers. But he has long lost his place and his raison d’etre.

Injuries, undeniably, are a major reason. But he has also been a man out of place and time, an individualist in a side where the collective comes first. Brendan Rodgers referred to Suarez and Sturridge as “soloists; I don’t see them as a pair.” Now Roberto Firmino is the selfless false nine who supplanted the striker; the relentless runner who offers something that a more languid, laid-back player cannot.

Perhaps the definitive moment of Sturridge’s time under Klopp was comparatively insignificant, yet revealing. In the 2016 Europa League semi-final against Villarreal, Adam Lallana – an early adoptee of Klopp’s pressing game – was closing down a defender, pointing to the next man to chase down the goalkeeper even before the ball was passed to him. But the next man was Sturridge, who was on a different wavelength and slow to react. He was not unwilling as much as unsuitable.

He is the man who reached 50 goals for Liverpool in fewer games than Suarez or Michael Owen, Kenny Dalglish or Ian Rush. And yet he is the incongruous sight alongside Suarez, Salah, Fernando Torres and Robbie Fowler in many of their Premier League records; while he oozed class, the derogatory chants of “one-season wonder” that were levelled at Harry Kane actually describe Sturridge. He scored 24 goals in 2013/14, but it’s the only time he topped 13.

Which prompts the question of what comes next. Rewind to January 2013 and, when Sturridge joined from Chelsea, Rodgers said he was “probably on his last chance” at a major club. In one sense he took it – Sturridge and Suarez duelling rather than dovetailing for goals as Liverpool came agonisingly close to winning the title. In another, frequently sidelined, he did not.

Perhaps Rodgers, the manager to bring the best from Sturridge, would be tempted by the thought of a reunion, but a non-scoring specialist finisher in Kelechi Iheanacho is making little impact at Leicester now.

The fragility of Sturridge’s frame may mean he is better suited to a squad player’s role at a bigger club than a status as a first-choice elsewhere, not least because few smaller clubs would be likely to match his £150,000-a-week wages. Yet in some ways, he needs a team that is built around him. Given his fitness record, that’s a major risk.

As Suarez feels part of Liverpool’s increasingly distant past, Sturridge looks a throwback with an uncertain future.

FEATURE Confessions of a turncoat: why I ditched Liverpool to support another team

REMEMBERED Luis Suarez’s 2013/14: how the Uruguayan stormed back from suspension to scythe through the competition