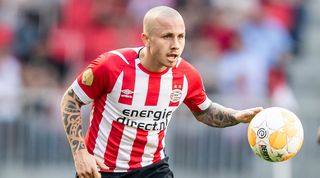 The Premier League champions sold the defender for a reported €5.5 million last summer, but he has since gone on to attract attention from PSG after an impressive campaign in the Netherlands.

According to La Voz de Galicia, City are keen to bring him back to England by activating a contractual clause that will allow them to repurchase him for €12 million.

PSG are said to have made a bid of €25 million for the Spain Under-21 international, prompting City to act.

Angelino was voted as the Eredivisie’s best left-back last season, sparking interest from the likes of Napoli, Borussia Dortmund, Barcelona, Arsenal and Ajax.

During his time at City, the 22-year-old made just three senior appearances, all of which came in cup competitions, and was sent out on loan to Girona, Real Mallorca, New York City and NAC Breda.

QUIZ! Can you name the 25 most valuable players in the world aged 21 and under?