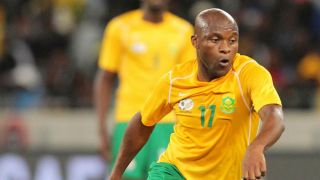 Goals from Tokelo Rantie, Thamsanqa Gabuza and Andile Jali earned 10-man South Africa a 3-1 win over Angola and put them in charge of their second-round World Cup qualifying tie.

Angola, the hosts for Friday's first-leg clash in Benguela, took an early lead through Gelson, but soon found themselves behind thanks to Rantie and Gabuza and were left furious at the late award of a penalty for South Africa's third goal.

Home goalkeeper Dominique was adjudged to have fouled Rantie as the striker bore down on goal 10 minutes from time, although replays suggested he had got a clear touch on the ball.

Jali coolly tucked away the resulting spot-kick but was then shown a second yellow card, seemingly for inciting the home support in celebration.

The victory means Bafana Bafana head into Tuesday's second leg at home well in control, having gained a modicum of revenge for their 3-2 aggregate defeat to the same opponents in the African Nations Championship first round last month.

The early exchanges provided the majority of the entertainment, with three goals inside the opening 20 minutes - the first of which arrived through Gelson.

Collecting the ball just inside the area, the forward wriggled away from three defenders before firing low into the bottom-left corner.

South Africa's response was swift, however, as Thabo Matlaba found Rantie in the box, and the AFC Bournemouth striker was given far too much time and space to control and curl a shot low inside the right-hand post.

Six minutes later the visitors moved in front, Gabuza running onto Mandla Masango's through-ball and sweeping a finish beyond the outstretched leg of Dominique.

With both sides struggling to create clear goal-scoring opportunities, it looked as though South Africa would leave the Estadio Nacional de Ombaka with a narrow first-leg lead, until the late drama ensued.

Dominique clearly pushed the ball away from the feet of Rantie, but the referee pointed to the spot.

Jali made no mistake in sending the keeper the wrong way, but his day was soured immediately as he was cautioned for a second time for his celebration, leaving South Africa to see out their triumph a man light.